Blimps are not just giant balloons, they are in fact a floating airship. The term “blimp” specifically refers only to a free flying aircraft and not anchored down or moored balloons. Initially blimps were designed for the military as a patrol unit it was only in later years that it had been thought of as a good advertising tool. Commonly found in many sporting events advertising blimps hover the air well above the playing fields or stadium. It’s likely that the most recognizable blimp is that of Goodyear which has been receiving so much TV coverage in various sporting occasions such as golf tournaments and most especially in football games which are very popular in the United States of America. 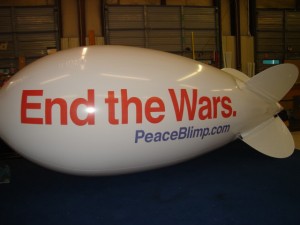 Advertising Blimps are an Ingenious Method

Advertising companies have long realized that using advertising blimps are an ingenious method. There are indoor advertising blimps and outdoor types. The indoor variety are of course more balloon like in nature, there are outdoor blimps which are similar but the most common ones are the aircraft varieties. If you have been to a football game or have witnessed a game even at home via your television set, it can easily be noted that stadiums are always jammed pack with people. Sometimes it’s overflowing to the brim that there isn’t enough space or a spot big enough for the entire stadium to see. While the big screens will play adverts these tend to be costly and are more widely available during halftime. Advertising blimps however have the entire duration of the game to simply just hover above the location. The enormous girth of the balloon makes the area a very viable spot to spell out a product, brand or service and can be seen from miles away. When you think about it, advertising blimps are simply like giant floating billboards it’s ability to move instead of being tethered to ta spot makes the advertisement more visible to a greater number of individuals. The expansive space allows for a more eye catching form of advertising. Various promotions, campaigns, announcements and the like can be set up on advertising blimps. Aside from being able to print out the actual advert, advertising blimps can be customized in many ways. Some creative designs include the use of various colored panels on the actual balloon, graphic prints and even led lighting setups.

Besides sporting events there have been many occasions when companies have hired advertising blimps to hover over a given location. In comparison to a regular billboard or poster, blimps are moving vessels that are capable of catching the attention of more people and are able to cover more ground compared to its counterparts found only in certain locations. Many however will admit that advertising blimps can be a costly method for promotion but it is clear that it covers a wider range therefore outweighing the costs of the initial expense and is in the long run a worthy investment. The rates of advertising blimps each vary depending on how much or how little the design on it is, also put into consideration the type of blimp to be used; like for example outdoor blimp air crafts could cost thousands to rent out. No longer just sky patrols, blimps have now found a new use to modern society.